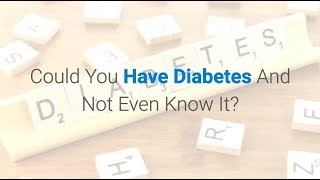 Almost one third of all people with diabetes don’t know they have it. The symptoms seem so harmless, like symptoms of just getting older. This article goes into the different types of diabetes and some of the common symptoms of each to help you understand diabetes a little better.

In this article we’ll go over the three main types of diabetes. They are Type 1, Type 2, Gestational diabetes.

This type of diabetes has also been called insulin-dependent and immune-mediated diabetes. It occurs when your body can’t produce insulin. The immune system attacks insulin producing cells in the pancreas. This type of diabetes is usually diagnosed in children and young adults, and was previously known as juvenile diabetes.

Type 1 diabetes increases the risk of other serious complications such as heart disease, nerve damage, blindness, and kidney damage.

Some of the symptoms include increased thirst, increased urination, weight loss even with increased appetite, nausea, vomiting, abdominal pain, fatigue, and absence of menstruation

Type 2 diabetes is the most common type that fails to be diagnosed. It progress slowly and causes symptoms such as skin infections, poor healing, kidney problems, and vision problems. It is ordinary that neither these complications nor the diabetes is diagnosed after years of mild symptoms.

The problem is usually that people have no severe symptoms and do not seek medical care at all. They just think of the symptoms as simply getting older. For this reason it is important to get regularly tested for diabetes in the most common age group (over 40’s). Less commonly a doctor may treat other diseases, without realizing to test for diabetes.

Gestational diabetes occurs during a womans pregnancy. Pregnant women who have never had diabetes before but have high blood sugar levels during pregnancy are said to have it. It affects 4 percent of all women during pregnancy.

Symptoms include Increased thirst Increased urination Weight loss in spite of increased appetite Fatigue Nausea and vomiting Frequent infections including those of the bladder, vagina, and skin Blurred vision.

Even if youre not pregnant, you should make it a priority to get tested. Many women have gestational diabetes and think about their symptoms as being usual during pregnancy. You never know, maybe it is, but its always a good idea to get tested.

If youre having any of the symptoms for diabetes, its important to see your doctor. Even if you think its absolutely nothing. Its better to be safe than sorry.